The convenience of slow cookers, multi-cookers, and pressure cookers have made these small appliances popular kitchen accessories. But while Crock-Pots, Instant Pots, and similar devices undoubtedly make it much easier for busy families to get a nutritious meal on the table, these products are not without risk.

In fact, dozens of people have suffered amputations, blindness, concussions, broken bones, and disfigurement because one of these cookers sparked a fire or exploded, while others have experienced electrical shocks because of faulty power cords or wiring.

The Killino Firm’s defective product lawyers believe the victims of preventable injuries and wrongful deaths deserve compensation for their pain and suffering. If you or a loved one were hurt because of a defective slow cooker, multi-cooker, or pressure cooker, please call our law firm toll free at 877-875-2927 to speak with an attorney and learn more about your legal rights.

Every family looks forward to a delicious and healthy meal at the end of a long day. But with work and other pursuits taking up so much of our lives, few of us ever have the time needed to bring a home-cooked meal to the table on a regular basis.

Various types of cookers marketed by various brands, including Instant Pot, Presto, Ninja, Tristar, Hawkins, Crock-Pot, and T-Fal, are intended to solve this problem. Crock-Pots and other traditional slow-cookers, for example, can be used to prepare everything from soup to pot roast while you’re away at work, out shopping, or running the kids to school and extracurricular activities.

Like slow cookers, pressure cookers have also been around for years. As their name implies, these devices rely on high steam pressure, as well as a sealed pot, to cook rice, beans, roasted and braised meats, hard- or soft-boiled eggs, and stews in far less time than a traditional Dutch oven. Electric pressure cookers may offer features like a timer, temperature gauge, food-specific settings, and Bluetooth technology. Stovetop pressure cookers require the user to monitor the temperature manually.

Stove-top pressure cookers have long had a reputation for being somewhat dangerous, as their lids are relatively easy to remove before the pressure is fully released. At best, this could cause food to end up on the ceiling. In the worst-case scenario, users and anyone else in the vicinity of an exploding stove-top pressure cooker could suffer burns, scalds, and other disfiguring injuries.

Electric pressure cookers and multi-cookers are supposed to eliminate this worry. But dozens of explosions involving these devices have been logged in recent years. Many of these accidents were the result of faulty valves that failed to work as designed. Other explosions occurred because of clogged vents that allowed the cooker to overflow or inadequate instructions and warning labels that resulted in misuse.

Victims of pressure cooker and multi-cooker explosions frequently suffer severe and disfiguring burns, including some cases that resulted in amputations. But there have also been reports of blinding eye injuries, cuts to the face, and even traumatic brain injuries.

While not as common, any electric cooker can cause shocks, electrical burns, or electrocution if the power cord, wiring, or other electrical components are defective.

Slow cookers are designed to cook foods slowly, at temperatures between 170 F and 280 F, a range that’s well outside the recognized ​food temperature danger zone.  If these cookers are misused or malfunction, bacteria can thrive and multiply rapidly, increasing foodborne illness risk.

Burns, shocks, and other injuries caused by pressure cookers, slow cookers, and multi-cookers are frequently the result of dangerous manufacturing or design defects. In fact, five different manufacturers have recalled defective cookers since 2015, including several products that caused personal injuries and/or property damage. 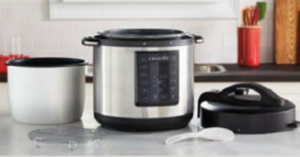 Most recently, Sunbeam Products recalled nearly 1 million Crock-Pot 6-Quart Express Crock Multi-Cookers that pressurized when the lid was not fully locked.  This occurrence could cause the cover to suddenly detach while the product is in use, posing burn risks to consumers from hot food and liquids ejected from the cooker.

The November 24, 2020, recall involved Crock-Pot 6-Quart Express Crock Multi-Cookers, Model Number SCCPPC600-V1, which appears on a label on the unit’s bottom.  The multi-cookers were manufactured between July 1, 2017, and October 1, 2018, with date codes K196JN through K365JN and L001JN through L273JN.  The date code is engraved on one of the prongs of the electrical plug and the bottom of the base. They were sold at Walmart, Target, and other retail stores nationwide and online at Amazon and other online retailers from July 2017 through November 2020 for between $70 to $100.

Sunbeam has received 119 reports of lid detachment, resulting in 99 burn injuries ranging in severity from first-degree to third-degree burns.

Consumers with these multi-cookers should immediately stop using the devices in the pressure cooker mode and contact the manufacturer for a free replacement, either online at recall.crock-pot.com/ or by calling 800-323-9519. 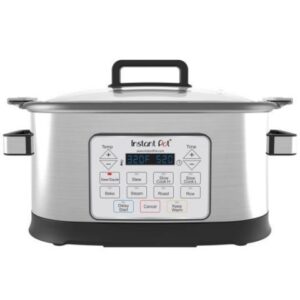 In March 2018, Double Insight recalled approximately 104,000 Gem 65 8-in-1 multi-cookers that posed a fire hazard because of a manufacturing defect that could cause the cookers to overheat and melt on the underside.

This recall involves Gem 65 8-in-1 model multi-cookers, a multifunctional, programmable cooking appliance, which includes the functions of roasting, baking, stewing, slow cooking, rice cooking, searing/sautéing, steaming, and food warming. Instant Pot is printed on the front of the multi-cookers. Gem 65 8-in-1 and a batch code of 1728, 1730, 1731, 1734, or 1746 are printed on the rating label on the product’s underside. They were sold exclusively at Walmart stores nationwide and online at www.walmart.com from August 2017 through January 2018 for about $80.

Double Insight received receive 107 reports of overheating, including five that resulted in minor property damage. No injuries were reported.

Purchasers were advised to immediately stop using the recalled multi-cookers, unplug the unit, and return it to Walmart to receive a full refund or contact Double Insight to receive a free replacement. 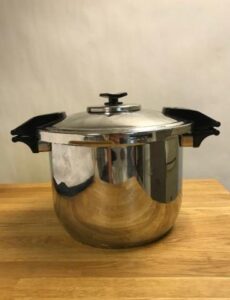 In August 2018, Rena Ware recalled around 700 Nutrex Pressure Cookers that could discharge steam at lower pressures than intended, posing a burn hazard to consumers, 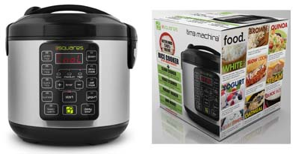 This recall involved 3 Squares-branded Tim3 Machin3 and Mini Tim3 Machin3 rice and slow cookers with fixed power cords. The 20-cup/4-quart or 8-cup/1.7-quart programmable electric cookers are stainless steel with black molded plastic, have a control panel/keypad on the front, and measure about 11 inches in diameter and12 inches tall. The 3Squares logo is printed on the front of the control panel. Model numbers starting with 3RC and ending in 3010S, 3020S, 3434, 5020, and 9010S are included in the recall. The model number appears on a label on the side of the product.

The cookers were sold at home, hardware, mass merchandisers, and department stores nationwide and online at Amazon, Bed Bath & Beyond, Best Buy, Costco, Get3Squares, Home Depot, Kohl’s, Target, Wayfair, and other websites from December 2015 through July 2016 for between $30 and $70, depending on the model and capacity.

The recall was issued after Sherwood Marketing had received three incident reports, including a cooker sparking when turned on and a cooker turning itself on. One shock injury was reported.

As the remedy is no longer available, consumers who still have one of these rice/slow cookers should immediately stop using, destroy, and discard the product. 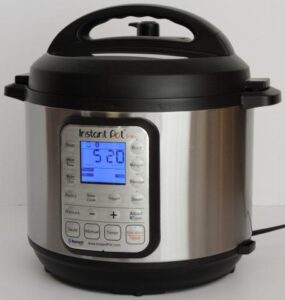 In July 2015, Double Insight recalled more than 1,000 Instant Pot Pressure Cookers because a thermal probe in the base could conduct electricity throughout the cooker, posing a risk of electric shock.

The recall involved Instant Pot “Smart” and “Smart-60” electric pressure cookers. They are stainless steel with black molded plastic attachments, have a control panel/keypad on the front, and measure about 12 inches in diameter and 12 inches tall. They are Bluetooth enabled and can be controlled by an app. “Instant Pot” and “Smart” are printed on the front of the control panel. Serial numbers between 1410 and 1503 and manufacture dates between 12/1/2014 and 6/1/2015 are included in the recall. The serial numbers and dates are printed on a label on the bottom of the pressure cooker’s base. They were sold online at Instantpot.com and Amazon.com from November 2014 through May 2015 for about $250.

By the time these products were recalled, three consumers had reported being shocked.

Purchasers were advised to stop using the pressure cookers immediately and contact Instant Pot for instructions to receive a free replacement base, which consists of the entire bottom of the pressure cooker, including the control panel. The firm also attempted to contact all purchasers directly. 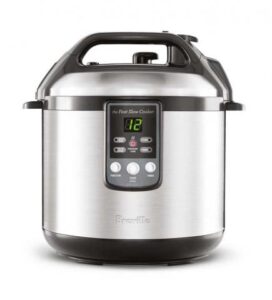 In December 2015, Breville USA Inc. recalled around 35,600 Breville Fast Slow Cookers because a sealing gasket was incorrectly inserted upside down on the lid. The defect can allow the unexpected release of built-up pressure, posing a risk of burns to the user or others nearby.

This recall involved Breville 6-quart capacity domestic programmable electric pressure cookers with a brushed stainless-steel construction and a 3-way safety system. The safety system consists of a locking lid, a safety valve, and a pressure release button. Pressure cookers with model number BPR600XL and batch numbers between 1235 and 1529 are included in the recall. The model number and batch code are located on the bottom of the unit. The cookers were sold at Bed, Bath and Beyond, Best Buy, Macy’s, Sur la Table, and Williams Sonoma stores nationwide and online, and online at Amazon.com and BrevilleUSA.com from September 2012 through October 2015 for about $180.

Breville received five reports of steam or hot contents escaping from the pressure cooker, resulting in five burn incidents, including second-degree burns to the hands, arms, or stomach.

How to Safely Use a Pressure Cooker, Slow Cooker, or Multi-Cooker

The use of a pressure cooker, slow cooker, or multi-cooker will definitely make mealtimes easier for busy families. However, to lower the risk of an accident or serious injury, keep the following safety tips in mind:

Our defective product lawyers have the resources and experience to ensure the victims of dangerously defective pressure cookers, slow cookers, and multi-cookers receive the compensation they deserve.  If you or a loved one were injured by a defective cooker and you’d like to speak with an attorney, please do not hesitate to contact the Killino Law Firm at 1-877-875-2927.