A great many accidents involving trucks or other commercial motor vehicles (CMV) are caused by CMV drivers’ negligence, or the failure to exercise the required level of care for the safety of other vehicle occupants. Truck drivers, as common carriers, have a greater duty of care for others’ safety than do drivers of cars and other smaller vehicles. They are professionally trained, with Commercial Drivers’ Licenses (CDL) and need to take extra care to avoid injury to others from impacts with CMV weighing 10,000 pounds or more. CMV drivers must follow the same road rules and traffic laws applicable to other drivers, but they must also yield to smaller vehicles to avoid what are often catastrophic accidents and resulting injuries or deaths. 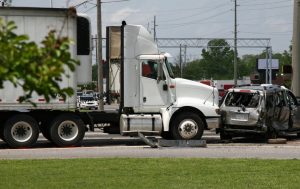 This big rig T-boned the other vehicle.[/caption]Though truck accident cases can be quite complex and require the testimony of several types of experts and the assistance of trucking accident lawyers skilled in the law and science of truck accident cases, the law of negligence is somewhat straightforward. A negligence action brought against a truck driver requires proof by the plaintiff that the driver failed to exercise the duty of care owed to the victim (i.e., that the driver was negligent), that the victim was injured or killed as a result, and that the injury or death resulted in damages compensable under the law.

A truck driver can be found to have been negligent for a variety of reasons. Drivers are often paid by the mile, providing them with the financial incentive to violate speed limits and other traffic laws or to drive too fast for road conditions. Truck drivers who are in a hurry or who have had inadequate training may make turns in an unsafe manner, fail to take required breaks and rests, carry unsafe or improperly secured loads, or drive under the influence of controlled substances.

Certain types of errors commonly made by truck drivers can cause truck crashes and injuries and result in driver liability in negligence actions.

A great many truck accidents occur when truck drivers crash into the backs of other vehicles. This can occur when a truck driver falls asleep or becomes inattentive due to fatigue, fails to keep a safe distance between the truck and the vehicle ahead, drives too fast for road conditions, or carries too much weight on the truck. Any one of these reasons for rear-end collisions can be found to constitute driver negligence and result in a driver’s liability for accident injuries or deaths.

Large trucks, such as 18-wheelers, big-rigs, or tractor-trailers, require more room than smaller vehicles with which to make turns. Drivers who have been properly trained receive instruction regarding the maneuvering needed to safely turn CMVs. Left turns made with tractor trailers, for example, can take a great deal of time to execute properly. If a driver fails to consider the speed and proximity of oncoming traffic before beginning a left turn or considers it and hopes oncoming traffic will stop, the driver may cause a collision with other vehicles and be found liable for resulting injuries or deaths. Such maneuvers can often result in another vehicle’s passing under the trailer of a truck when the trailer is not sufficiently visible. A driver’s negligent left turn as well as the driver’s failure to ensure that the trailer is outfitted with lights, reflectors, and reflective tape sufficient to make the side of the trailer visible to oncoming traffic may result in the driver’s liability for injuries or death caused by such an accident.

Stopping a Truck on a Shoulder or Roadway

A truck driver who becomes fatigued may pull onto a shoulder or to the side of a road rather than exiting a highway. Drivers are required to place warning markers behind stopped trucks to warn other drivers that the trucks have been stopped. If a driver fails to use markers after stopping or fails to place them appropriately, the driver may be held liable in a negligence action for the injury or death of a motorist who ran into the stopped truck.

Drivers who improperly load their trucks may cause accidents when insecure loads fall from trucks. Accidents can also occur when property that has been unevenly or insecurely loaded shifts and causes a truck to overturn or jack-knife. Any injuries or deaths caused to others as a result can lead to a driver’s liability in a negligence action.

Inattentive, fatigued, or unqualified truck drivers often cause serious accidents by failing to signal when changing lanes, going through traffic lights, driving erratically, violating speed limits, or failing to allow for unsafe road conditions. Any traffic violation will be considered negligence per se in an action for negligence against the driver and result in the driver’s liability for any injuries or deaths determined to have been caused by the violation.

CMV drivers may be found liable for injuries and deaths caused by their driving while tired. Hours of Service (HOS) Regulations designed to prevent these types of accidents require drivers to drive only for specified lengths of time and to take breaks and rests at specified times and intervals. The violation of these regulations may be found to constitute negligence on the part of a driver who caused an accident through inattentiveness, fatigue, or falling asleep at the wheel. In addition, driving while fatigued, even when not in violation of HOS Regulations, may be found to constitute negligence by a driver whose fatigue led to an accident and victims’ injuries or death.

Any of the above instances of truck-driver negligence and others may result in a truck driver’s liability for accident victims’ injuries and deaths and may also result in the liability of the driver’s employer. Our truck-accident team has extensive experience holding negligent truck drivers and their trucking-company employers responsible for injuries and deaths caused by driver negligence. We work with the best of experts to show how an accident occurred and how a driver’s negligence caused or contributed to that accident. We thoroughly investigate the accident itself, the trucking company, and the truck driver involved. We obtain the driver’s files, records of employment, previous accidents, and violations, and witnesses’ statements to establish where and how the driver went wrong and why it led to our client’s injury. If you have been injured or a family member has been killed in a truck accident as a result of truck-driver negligence of any kind, our esteemed truck accident attorneys can help you obtain the compensation you deserve.