The September 4, 2014, death of 81-year-old Joan Rivers a week after undergoing an outpatient procedure at the Yorkville Endoscopy clinic has raised questions by fans and officials regarding the cause of the well-known comedian’s death. During what has been described as a routine throat procedure to treat Ms. Rivers’ voice changes and acid reflux disease, Ms. Rivers is reported to have stopped breathing and to have gone into cardiac arrest. The New York City Office of Chief Medical Examiner (OCME) ruled her ultimate death to have been caused by a lack of oxygen to her brain during the procedure. Specifically, the OCME found that Ms. Rivers’ death was caused by “anoxic encephalopathy due to hypoxic arrest during laryngoscopy and upper gastrointestinal endoscopy.” Though the OCME stated that “the death resulted from a predictable complication of medical therapy,” investigations conducted after Ms. Rivers’ death have revealed evidence of failings on the part of clinic personnel and the clinic, itself.

An investigation by the Department of Health and Human Services Center for Medicare and Medicaid Services found that Yorkville Endoscopy personnel “failed to identify deteriorating vital signs and provide timely intervention” during Ms. Rivers’ procedure. Clinic personnel were also reported to have failed to properly document how much of the sedative Propofol was used on Ms. Rivers during the procedure and to have taken cell-phone photographs of Ms. Rivers while she was sedated.

Another investigation, conducted as a matter of routine by the New York State Health Department, is reported to have discovered lapses by the clinic in four categories required for accreditation (governing body and management, surgical services, medical staff, and patient rights). According to a statement issued by Yorkville Endoscopy after these findings were released, the clinic has submitted and implemented a plan to correct the issues raised in the investigation. The clinic also stated that the Yorkville Endoscopy physicians who were involved in Ms. Rivers’ direct treatment and care were no longer practicing or providing services through the clinic. 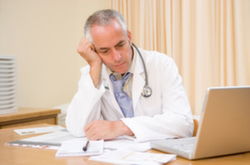 Negligence of Hospitals or Clinics

Hospitals and clinics may also be found vicariously, or indirectly, liable for patients’ injuries and deaths that are determined to have been caused by the negligence of hospital or clinic employees. If, for example, a physician employed by a clinic or hospital is found to have negligently caused a patient’s injury or death, the clinic or hospital, as the physician’s employer, may be found indirectly liable for the patient’s injury or death.

Negligence of Physicians and Other Medical Professionals