Toddlers trapped in front loading washing machines have made headlines recently. A Florida toddler playing with his sibling was trapped in a front-loading washer–he was pronounced dead at the hospital. Two months earlier, a two-year-old in China climbed into a washer for fun but she got stuck in the drum and her parents were unable to pull her out. It’s unfathomable that washing machine manufacturers haven’t designed a machine to prevent kids from climbing into these dangerous appliances.

Authorities told the Orlando Sentinel  in August 2019 that the 3-year-old Florida boy died probably due to a lack of oxygen after being trapped inside the front-loading washer in his home. Investigators haven ‘t disclosed the name of the washer brand. The Consumer Product Safety Commission (CPSC) is also investigating the death.. Front loaders are popular because of their water and energy efficiency, but they were involved in two of three known deaths since 2014. The CPSC also reports about 3,000 emergency room treated injuries associated with washers since 2014 among children five and younger. Most of those injuries were related to falls—kids love to climb. 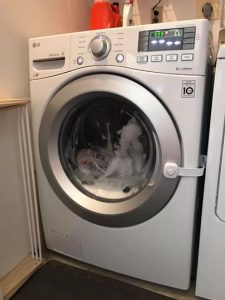 A Colorado mother of three in July 2018 first warned in a Facebook post a horrific story:  she and her husband were woken early one morning by their four-year-old son. He was crying and barely able to tell them that his young sister was trapped in their LG front-loading washing machine that was tumbling and filling with water. Fortunately they unlocked the door and she escaped pretty much unscathed with a few minor bumps and bruises. The mother, Lindsey McIver, shared her story online because she wants consumers to be aware of a child lock feature on the settings that won’t allow the washing machine to start once it is engaged, but it does not lock the door.

Nationally-recognized child injury attorney Jeffrey Killino is concerned with making sure our children are safe. He has handled a wide variety of child injury cases, including child washing machine injuries. Our experienced attorneys, paralegals, and investigators share the goal of helping injured families win the compensation they need and the justice they deserve. If your child has been hurt or killed due to an unsafe and/or defective washing machine, call us today at 1-877-875-2927.

The Korean appliance manufacturer Samsung in 2016 recalled 2.8 million top-loading models for “excessive vibration” that caused the some of the washer’s tops to be violently flung off of the chassis during the spin cycle. Samsung had received 733 consumer complaints and nine reports of injuries.

Washing machines have caught fire due to electrical and mechanical failure.

For instance, faulty wiring or leaks that allow water to contact electrical components are a source of such fires. LG recalled almost half a million of its top-loading washers in 2012 due to excessive shaking caused by imbalanced loads. And in 2007 both Maytag and Samsung recalled front-loading washing machines because water can leak onto the electrical connections to the washer’s thermal sensor and result in an electrical short, igniting a circuit board.

There are no mandatory safety standards for washing machines, according to the CPSC.  Instead, voluntary standards are set by organizations such as Underwriters Laboratory (UL) and the American National Standards Institute (ANSI) in consultation with industry representatives.

First and foremost, lock the washer door with a child safety lock and always keep the child lock setting on!  The CPSC website maintains an up-to-date recall list for consumers; has a database where the public can report problems with their appliances and details “How to Keep Your Child Safe Around Washers”.

Attorney Jeffrey Killino is not only an experienced lawyer — he is also a child advocate. When a child injury or death occurs, whether it is a because of a faulty washing machine or other product, he has the know-how and resources to guide you through the legal process to get what you and your family are entitled to. If your child has suffered a traumatic injury because of a company’s negligence, Jeffrey Killino can help. Contact child crib death attorney Jeffrey Killino today at 877-875-2927.