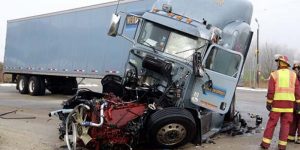 Among the most common and deadliest causes of truck accidents, there are several “hidden” reasons, and almost 90 percent of tractor-trailer wrecks share a common cause: Human error. That statistic includes everyone on the road— not just truck drivers—but a study from the Federal Motor Carrier Safety Administration (FMCSA) found that 87 percent of fatal crashes involving large trucks were caused by the truck driver. And large truck crashes are on the rise.

The National Highway Traffic Safety Administration (NHTSA) reports that fatalities decreased from 2017 to 2018 in almost all segments of the population but fatalities in crashes involving large trucks increased for the fourth year in a row.

When a large truck is involved in a crash, chances are the outcome is catastrophic. Weighing up to 80,000 pounds, these gigantic vehicles barreling down the highway require the driver to be fully alert and experienced. Because trucks can weigh 20 to 30 times as much as passenger vehicles, they can potentially cause 20 to 30 times more damage.

At the Killino Law Firm we understand the laws that govern all motor vehicle accidents, particularly tractor-trailer accidents. Our highly trained and experienced legal team has a proven track record of success in handling such accidents nationwide, and we know about highway safety.

The FMCSA has posted online events surrounding truck crashes. And the agency lists five following factors among the most prevalent and deadliest causes of large truck accidents

Manufacturer defects, neglecting regular upkeep, and faulty maintenance jobs can cause brake problems that lead to a wreck. The best driver in the world is only as good as the truck they are driving.

Fatigue is a major cause of crashes and can be caused by lack of sleep, unhealthy work hours—and medications (below)

3. Drug Use including Over-the-counter and Prescription Medications

Illegal drugs are an obvious cause of truck crashes, but legal medications can also cause impairment. Cold and allergy medications have a host of side effects, including sleepiness, blurred vision and dizziness. Some drugs warn not to operate motor vehicles while taking them.

Drivers are compelled to meet employer’s demands so they are often stressed, have high blood pressure and smoke. And they are typically paid by the mile so more time on the road leads to lack of exercise and unhealthy eating habits. Almost 90 percent of truck drivers are overweight or obese. Long hours and sedentary lifestyle leads to a variety of illnesses, such as heart disease and diabetes.

Commercial truckers must have the necessary skills to be road-safe, and the majority of the public takes for granted that truckers will make smart decisions while driving, but that doesn’t always happen. It’s estimated that over the next 30 years, trucks will move 40 percent more freight than they do today. Increased volume means driver shortage, and trucking companies are pressured into hiring younger, less experienced drivers.